The most expensive car accident in the world - Newbies Forum

Forum Post / Reply
You must log in before you can post or reply to messages.
The most expensive car accident in the world
Wednesday, December 07, 2011 11:46 PM
Cherie Hunter 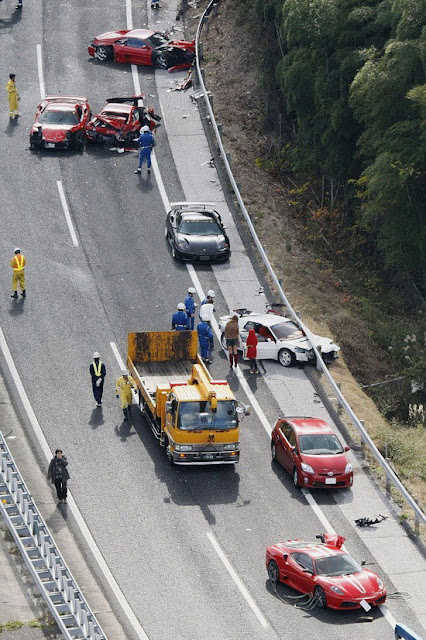 What a highly unusual sight happened in Japan. The 14-supercar pileup involved 8 Ferrari, a Lamborghini, a Mercedes-Benz, a Nissan and 3 Nissan GT-R, resulting in up to millions dollars in property damage, but fortunately no one got seriously injured. This crash was thought to be the most expensive car accident ever. What a pity for insurance companies!

Personally, I think that this expensive car crash shows these rich men are too idle to have nothing to do!!! They bought car to hit! After I saw those pictures on the web, my feeling is listing below:

First, if the hadn't run fast, the car shouldn't have hit so badly.

Second, the lineup means the distance among those cars was very close. Or else how could they hit together?

Third, richest brothers, ahahha, are you loyal fan of Initial D. Are you trying to imitate how those cool guys driving in the movie? But the road you run is not Autumn Mountain; the skills you master couldn't compete with the car racer.

Fourth, young generations who are wealthy should think about earning more money rather than having fun.

Five, wish these cars in this accident have different insurance companies. Otherwise, facing the most luxurious car accident, the only insurance company has to cry and die. LOL.

Re: The most expensive car accident in the world
Sunday, December 11, 2011 10:42 AM
AJ B
not so bad at least one car made it without any harm to it lmfao

"As I lay rubber down the street, I pray for traction I can keep, but if I spin and begin to slide, please dear God protect my ride." -Amen

Re: The most expensive car accident in the world
Monday, December 26, 2011 11:23 PM
Valerie Hissong
You can't forget about the one Toyota Prius that was involved and if I remember right, caused the whole shebang!

You can't forget about the one Toyota Prius that was involved and if I remember right, caused the whole shebang!

Props to the Prius that took took out 6 exotics. I wonder which ones insurance company had to @!#$ bricks? lol