Forum Post / Reply
You must log in before you can post or reply to messages.
Assistance appreciated (lighting issue)
Sunday, October 16, 2016 2:44 PM
Steve Dennis
Hello everyone,

I've ran into a weird situation. I drove my Z down to the grocery store last night and upon cutting the ignition after parking, I heard the chime come on warning me that I had not yet turned off my headlights (which I did upon hearing it). After shopping and returning to my car, I started it up and hit the light switch. At this point, the headlights came on and my digital dash and radio display quickly faded to black. Not only does the warning chime no longer work, but I haven't been able to get the situation corrected. Any thoughts? Thanks in advance!

Re: Assistance appreciated (lighting issue)
Sunday, October 16, 2016 3:13 PM
butch nackley
I guess you checked fuses? Maybe the light switch or the dash light dimming rheostat? No idea about the chime though. I don't have a fuse box diagram handy, but maybe these are on the same fuse.

Re: Assistance appreciated (lighting issue)
Wednesday, October 19, 2016 9:06 PM
Ron Love
I will try to assist you with some details now,but more to follow.On your electronic cluster it has a rheostat and this controls the dash's light with the headlights on or off.I will dig a touch as I think it should be on the back of the actual headlight switch however I think there located close as it is like a box size part in theory.First check your fuse box for the instrument cluster fuse as already stated.Second if the fuse is good you have to pull the cluster out to check for voltage at the harness to the cluster.Last is the cluster ground wire ensure a good ground.This may not be a lot but,I skipped the computer for two days and will look into it and try and provide I hope a simple fix.It could be just a bad headlight switch even though the lights work it provides power to light up the cluster itself and ties into the radio.R

Re: Assistance appreciated (lighting issue)
Wednesday, October 19, 2016 9:14 PM
Ron Love
One more that I forgot.Is the dimmer switch could have gone bad!!!!! I had this happen in my 87 mazda truck.Lets keep it simple!!!! If I have too I can send you a headlight switch if I have at least 2.R I digging thru my totes after this as all my electrical extras are in the house for protection.

Re: Assistance appreciated (lighting issue)
Thursday, October 20, 2016 8:58 PM
Ron Love
Upon my checks and correct in my theory the rheostat is built into the dimmer switch.IF this dimmer switch fails it will not illuminate the dash or radio! I will gladly part with 1 of the 4 headlight switches I have soley if you pay for the shipping thru fedex.Yep a free part just shipping cost and it is a little worn but heck they all are in the imaging area of the words or affixes of the switch.Just let me know R

Upon my checks and correct in my theory the rheostat is built into the dimmer switch.IF this dimmer switch fails it will not illuminate the dash or radio!

Yes, the rheostat IS the dimmer wheel on the light switch assembly. I figure that is what's wrong, if a fuse isn't blown. When I suggested that may be the problem, I should have went on to say it can be checked with a multimeter. Maybe he can do that to know for sure that is what has failed. Most likely it is. If it is, the good one you are going to give him will fix the problem.

Re: Assistance appreciated (lighting issue)
Tuesday, November 01, 2016 5:49 PM
FrankD
The rheostat is connected to a dimmer module that also goes to the convenience center, that contains the warning chime. If this goes bad it will affect the panel illumination and the warning chime. This is the part in question, it is attached to a heat sink.
http://ecatalog.smpcorp.com/bwd/#/searchparts/searchText/s7207?type=p&search=s

Re: Assistance appreciated (lighting issue)
Friday, April 14, 2017 7:56 PM
Ron Love
http://www.v6z24.com/jbodyforum/digi-dash-woes-t116574,highlight,rheostat.html Frank D! was spot on this issue and part.To catch some of you up on the problem I will say.Steve has a 87z with the digital dash.His dash lights work with the headlight switch OFF,but when the headights/markers are turned on the dash and hvac and radio go black.I will I say I his had to dig a touch to find some info this week.I would like to point OUT this rheostat is Specific to the cars ONLY with the digital dash option.I will say on my car with the analog gauges as most other Jbodies the rheostat is actually built into the actual dimmer (roller switch) on the headlight switch and Not a separate part as I have recently Learned!!! Frank D you do KNOW your stuff and I wish I had paid attention from the get go to save steve the headache with a headlight switch he did not need!!!Steve I just suggest using the link frank D showed in the above post and change out the said part.Only thing I do not know is where the said rheostat is exactly located,so unless Frank D. pops up and points this out idk.I may pm frank to maybe help out and make this easier.

Re: Assistance appreciated (lighting issue)
Saturday, April 15, 2017 4:10 AM
FrankD
It is located behind the lower part of the dash, to the left of the steering column and to the right of the fuse panel.

Re: Assistance appreciated (lighting issue)
Saturday, April 15, 2017 7:00 AM
Steve Dennis
Thanks guys! Frank, can this be accessed without dropping the steering column? Also, do you know of an on-line source for purchasing a replacement?

Re: Assistance appreciated (lighting issue)
Saturday, April 15, 2017 8:29 PM
Ron Love
Steve based on franks information you should Only have to remove the lower panel facing the floor board.Keep in mind the screws that hold it are going towards the firewall and on recall maybe some going up towards the dash.This panel is black and I really think it is maybe 4 screws and once removed you can see all the wiring,hvac tubing etc and should alloy full access to the part frank showed.I have removed a dash or two in my time and that 1 panel is pretty simple to remove as when I did some new radio spkr wiring I had to take that exact panel out.Easy!!!!!!! 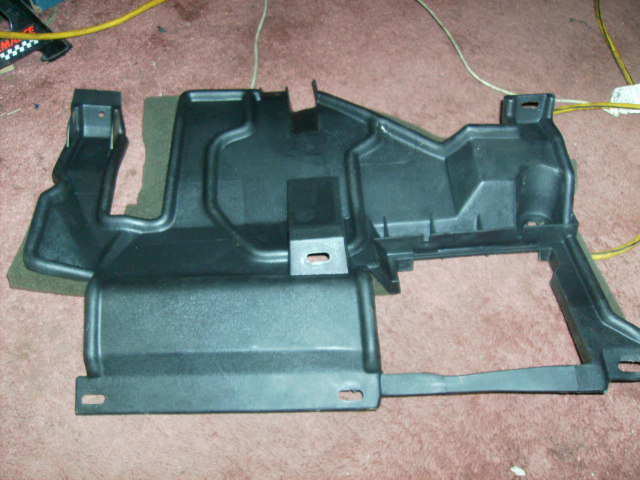 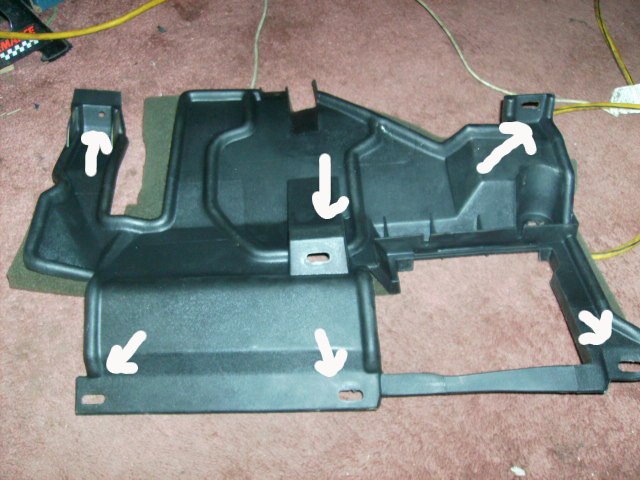 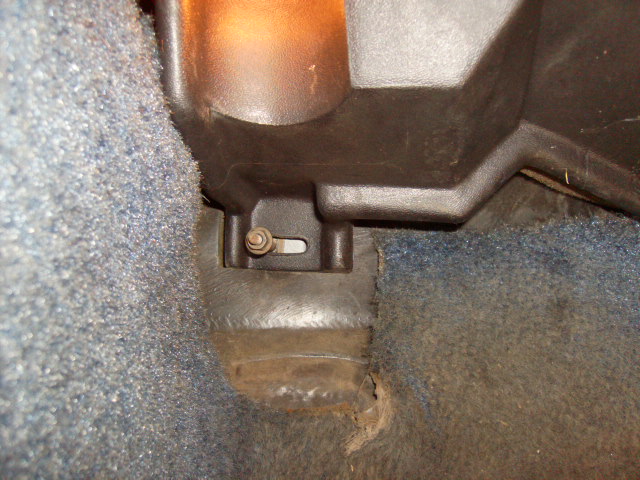 Re: Assistance appreciated (lighting issue)
Tuesday, April 18, 2017 5:43 AM
FrankD
You also have to remove the filler panel below the column to get to the screws that retain it.

I ordered the correct part from BWB (item S7207) and followed all of the kind directions offered previously in the thread. Unfortunately, either I'm blind and otherwise challenged, or the rheostat isn't where it's supposed to be. After removing the black colored "floor-facing" panel and the filler panel below the column (where the small air vent is located), I wedged myself in a contorted fashion underneath the dash and came up empty handed. Please view the attached photos for reference. Nothing... and I mean nothing resembles the rheostat. Before tearing the passenger side of the dash apart, is there any other location this could be? I looked behind the stereo and couldn't see it either. Thoughts appreciated. Again, it's an 1986 Z24 - not 1987. Perhaps this year was different? Thank you!

It is located behind the lower part of the dash, to the left of the steering column and to the right of the fuse panel.

Did you look in this area.It should not be anywhere near the radio.Ok

Re: Assistance appreciated (lighting issue)
Monday, May 14, 2018 7:12 PM
Steve Dennis
I did and took photos as well. There was nothing like it that I could see. I wedged myself into a very uncomfortable position under the dash on the floorboard looking up. I had my bright work light under there and was very thorough. Since I have the replacement part, anything even resembling it would have caught my attention. That's why I'm wondering if there was another location for my year of car?

Re: Assistance appreciated (lighting issue)
Thursday, May 24, 2018 11:26 AM
Ron Love
I do not know right off hand.Been busy and the reason for my reply back.I will dig around to see if I can find some information that may be different than the normal J car location of said part.

Re: Assistance appreciated (lighting issue)
Friday, May 25, 2018 11:14 PM
Steve Dennis
Thanks Ron. If you look at the photos I provided, there's nothing there. I did get upside down to look up under the dash as well and snapped an image of that as well. The rheostat is a decent sized object and very distinctive. With the built-in heat sink which has the holes for attachment, it should theoretically attach to metal but there were no surfaces (as seen in the photos) for it to attach to. I had everything brightly lit and there's no way I could have missed it from the locations checked - which was definitely in the area suggested.

Re: Assistance appreciated (lighting issue)
Sunday, May 27, 2018 8:05 PM
Six_Shooter
According to Mitchel this is the location of the Rheostat power unit dimmer.

Kinda hard to make out exactly, but it looks to be a part of or very near the chime unit mounting block.