Forum Post / Reply
You must log in before you can post or reply to messages.
1.8 OHC Timing
Tuesday, September 07, 2021 10:18 AM
David Berger
Hey guys! I have an 84 Sunbird LE with a 1.8 nonturbo engine. It had jumped a tooth on the timing belt at some point in its life, and the previous owner's solution was to set base timing to 40* advance or something crazy like that. Ran like garbage.

Well, I've put a new belt on, re-timed the block and got her running quite nice now. I'd like to dial in my base timing now, but I haven't found a whole lot of information on how to do it for this specific engine. Here's what I have from a myriad of different sources and some assumptions made on my part.

And yes... I think my emissions sticker is missing off the shock tower. I don't see one anywhere under the hood.

So, I gather before I start, I install a jumper wire inside the cabin like I was running a diagnostic test on the ECM. It's looking like base timing should be 8* advance? I've seen 10* for the turbo motor, but think I've seen 8 for the non-turbo. I do have a punch mark on both the head and distributor body. Line those up and go from there? Finally, I'm not sure if I hook my timing light up to the coil wire leading to the distributor to perform the "averaging" method, or do I just hook up to the #1 wire and time the engine like any other? Once all is said and done, turn off the engine and remove the jumper. Do I need to reset the ECM after? If I disconnect the battery negative, it instantly resets mine. No wait required lol.

Sorry for the roughness of the photo. I took this over 10 years ago and my camera wasn't nothing like the ones today. Unfortunately this hood is off the Pontiac (replaced with better one) and is stored (buried) away in the shed and impossible to get to right now. When I get a chance I will gladly take a better photo and post on here for you. This car is also 1984 year model with Auto Transaxle.

Yes you have to ground connector under the dash as you noted. Timing is the average timing method cylinders #1 and #4 at 8 Degrees. Of course you not going to get much better out of this - it only puts out 85 Hp to begin with, but you might clean up the emissions a tad if that is your desire.

I can't give you any experiences with this because I just tuned mine by feel and sound. I actually left the timing cover off so I can keep an eye on the timing belt condition. Runs nicely like you noted with yours. Replace the head and cam back in 2017. You can remove the cap off the idle adjustment screw and change your idle speed to suit you too. My main concerns on my J2000 Sunbird is that is runs cool and has good oil pressure. The heads crack easily so keeping it from getting a temperature is a must. Engine is non interference. Starters are a nightmare to replace - just take an hour to see if you can find it. I will say i actually enjoyed doing the head job on this car (This is the time to put in a NEW Starter). Very simple. Watch out for the ground wires as you take it apart. Missing one once back together will really give you some awful strange symptoms.

I'm with you in that I'm just looking for a happy engine - not looking for extra gains or anything. Thank you so much for clarifying how to time the distributor.

The only issue I have left to chase is a hesitation or stumble when starting from a dead stop, or during very light throttle input while cruising. It's an extraordinarily easy engine to work on with very few exceptions (like the starter you mentioned hehe), and I seriously enjoy working on it.

Re: 1.8 OHC Timing
Friday, September 10, 2021 11:33 AM
Orlen Brown
Taking the cap off and raising the idle speed a little bit might help with the start up stumbling. I had to compromise between a little higher idle speed and easier start-offs myself. Mine still likes to stall out when backing up when I let off the throttle, so I just try to use the brake and gas pedals at the same time when I back it up in the back yard. There is so little torque at idle with these little engines. I noticed lack of low idle torque with the double cam LD9 on the 3rd Gens too. But really that is such a small issue for what is almost a 38 years old for these antiques.

Another issue very common on these old GM's is the lock up torque converter sticking. The relay inside the transmission gets sticky. If you are unfortunate enough to get stuck the engine will simply die on you when you come to a stop because the lockup stays engaged. To get home - floor the pedal in neutral and drop it in low. The transaxle will go to 1st gear and hopefully spin the tires enough to get rolling. Most all the old GM's I have had , I've had to disconnect the pigtail going to the transaxle. It is located on the right side of the radiator down on the side of the transaxle - a 4 prong connector. Pull it off and once the lock-up comes back off (usually after everything cools off ) you cam drive it as a simple old style 3 speed auto. I live in Virginia with lots of mountains and I find the car does better without the lockup going uphill. The converters do build up more heat pumping fluid instead of clutch contact, but unless you do a lot of highway cruising it isn't a problem. At my age I don't drive all that fast these days anyway.

Your Vert probably has the gauge package, but if it doesn't or they aren't reliable you can actually run aftermarket gauges on these if you desire. (Takes a bit if wizardry to figure out where to put them.....) Mine blew the factory oil pressure sending unit (Idiot light type) a few years back and for about the same money I could install the aftermarket mechanicals. BTW that oil pressure sending unit is also a PIA to get to. Had to drop the exhaust. I guess it has something to do with the front mounted oil pumps, because this year I had the exact same problem on a '91 Cutlass Ciera with the 3300 V6 that also has the front mounted oil pump. It , too, now sports a mechanical aftermarket.

Re: 1.8 OHC Timing
Friday, September 10, 2021 8:56 PM
David Berger
Hmmm interesting about raising the idle speed. I get an intermittent CEL with code 35 despite everything I've done under the hood. Might be worth looking into. The prior owner installed a triple gauge set to supplement the idiot lights. All of mine work still, including the aftermarket parts! Changing out the transmission control solenoid was one of the first items I had to take care of before my car was drivable. I had my clutch stick at a super busy intersection right after buying the car (was wondering why that 4 prong connector had been unplugged from the tranny), and had a bunch of people help me push the car off the road. Embarrassing lol... That solved that problem. Definitely getting better and better. Drove it with the top down today. It was a blast!

I uploaded to Pinterest since I am no longer on Facebook. Feeling rebellious against the big brother these days. 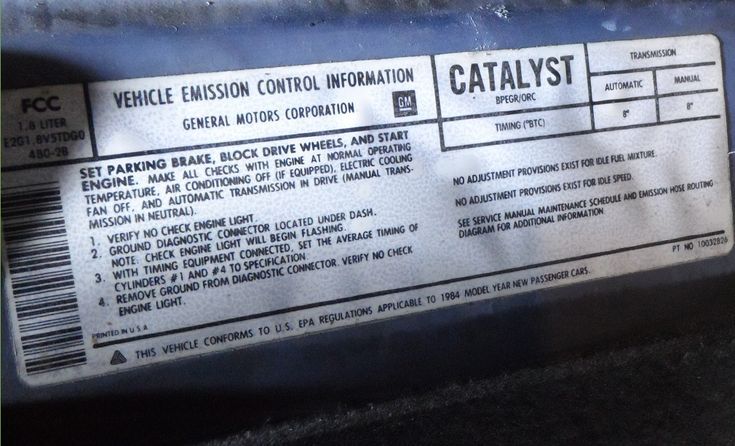 Re: 1.8 OHC Timing
Sunday, October 24, 2021 7:26 AM
Ron Love
Just read your issues and based on MY experience here are some suggestions.1st pull the egr and make sure its not blocked up with carbon.A simple way with out Removing it is just disconnect the vacuum line and IF it clears up the problem (REPLACE ) the EGR.2nd thought being its a throttle body I would make sure the injector has a Fine mist and not dribbling fuel.3rd it could be the Fuel pressure regulator inside the carb itself (it has a rubber diaphragm ) which over time does wear out.Thats some things to do simple checks aside from the 3rd one as you have to take it out to verify and at that point replacing it is the ONLY option.Hope this is useful .Ron

Exploded view of a TBI broke apart.The fuel pressure regulator is the Tall gold colored part to the Right in this pic.You will see the Rubber gasket to its side which over time will just get weak.It has metal in it.