...we're using a Mega Squirt computer system instead of playing with PCM's...

On your car, with the 5-speed, using a factory ECM is very easy, and it will be simpler than using the MegaSquirt as far as the gauges. You're going to have to wire the MS anyway, and it still won't run your gauges. Use the GA harness, and either flash the ECM to an Impala program or pick up an Impala ECM. All you have to do is have the tranny codes and passkey system turned off, and it will work perfectly. The problems with the Impala program only come up if you're using an automatic. You might want to talk to JoMx, as he's tried numerous different flashes on his swap.

On another note, anyone considering mounts from the GP, the lowers should be in the end of the week.

Re: V6 swap info for 3rd Gens
Tuesday, March 02, 2010 6:52 PM
-sunnirae-
How do the transmission codes work? Using an Impala flash, how will that work with a five speed transmission? Do you still have to use HP Tuners or some other program to shut them off? My husband works at GM and, as such can flash the PCM with a stock Impala flash. That would make things so much easier than using a Mega Squirt (also the initial cost of it, plus the wide band O2 sensor cost for tuning) and pissing around with getting it right. I will also get ahold of JoMX and see what's on the downlow. Thanks for the heads up!

Re: V6 swap info for 3rd Gens
Wednesday, March 03, 2010 7:08 AM
Mr. Quick
I don't currently have HPT. I haven't even deleted the codes in my new ECM yet (I'm on my second ECM/harness setup due to some unaddressable issues with my original plan), but there are a few companies who will delete your tranny codes and theft system. It can not be done at a dealer, unfortunately, as I'm sure your husband is aware of.

Re: V6 swap info for 3rd Gens
Monday, March 08, 2010 5:09 PM
Mr. Quick
I posted these pics in the GP, but since the GP will be gone once it's done, I wanted to post them here permanently. This is the lower mount installed with the factory dogbone: 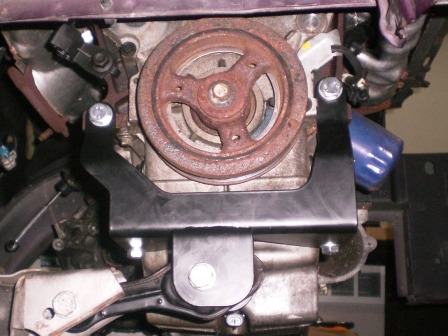 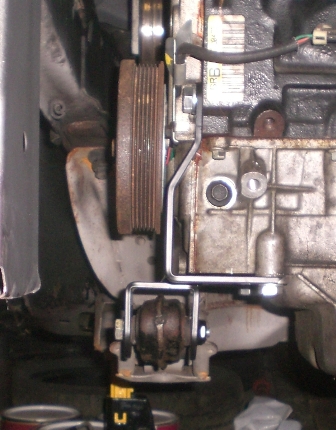 Re: V6 swap info for 3rd Gens
Saturday, April 17, 2010 2:13 PM
Weatheralls Auto
Mount looks good, I had been follow your progress earlier.
FYI, The 3500 does not have the holes in the front of the block, so this style of mount will not work for them.
Now my mount is welded, I need to re/re and repaint then reinstall with loctight.
I will take pics of my set-up at that point.

Re: V6 swap info for 3rd Gens
Monday, April 26, 2010 6:13 AM
Mr. Quick
The 3900 will bolt in. However, for the same reasons a 3500 VVT swap isn't listed, the 3900 would be an electrical nightmare. Those two engines are drive-by-wire VVT engines, which means they have very proprietary electronics. You would need the BCM from the donor vehicle for the original ECM to work, or if you wanted to change to 3400 electronics, you would need to lock the camshaft. The bottom line is this sticky is made for the swaps that are most common. Once you get outside of these, it becomes such a large project that someone capable of doing it really wouldn't need a sticky.

Re: V6 swap info for 3rd Gens
Monday, April 26, 2010 10:47 AM
John Condon
so my next question is if the head is blown then should i just fix it and resell the whole car and then take the profit money off of it to buy a better engine? or should i just fix the engine and keep it?

If i was to resell it how much do you think im lookin at gettin out of the car?

Re: V6 swap info for 3rd Gens
Monday, April 26, 2010 12:16 PM
3500gtp
Whats the condition of the vehicle? You might only break even after repairing it and then trying to sell it. GM cars have bad resell value. Just depends on what kind of damage is done to the engine. You'll have at least a couple hundred on gaskets. I'd try calling around and see what 3400s are going for in you're area.

Re: V6 swap info for 3rd Gens
Tuesday, April 27, 2010 6:26 AM
Mr. Quick
Guys, please stop having conversations in the sticky. If you want to discuss things like your donor engine, etc., either dig up one of the 15 old swap threads, or start a new one. This sticky was made precisely because every other thread we had discussing how to do the swap got filled up with these things. It needs to be kept as clean as possible, so that whenever new info is added that will help with a swap, people won't have to skim through a ton of other things to find it.

Im pretty sure the Malibu came with the 3.1L my parents had a 02 with that engine. I think the 3.4L was used on the Grand am and the Alero as well if im not mistaken.

Re: V6 swap info for 3rd Gens
Sunday, June 13, 2010 11:14 PM
Luke Hoff
I havent read all the responses to this thread but I'm just going to throw this out there. 96 beretta/corsicas are obdII and do not have passkey or any of that anti theft bcm junk. It was the last year for the beretta/corsica's and the only year that they got obdII. Might be a easier option for this swap.

Re: V6 swap info for 3rd Gens
Thursday, July 29, 2010 10:12 AM
Casey Payne
I'm changing my car from an automatic to a manual, I'd like to know it fhis is possible since most 3.4 grand am engines were made for an automatic? How would I make this conversion? I want to use the 3.4 engine, but can I make it a manual, if so how? What do I do?

A trans from an older J-body will bolt to the 3.4. Would need to make or modify some mounts. May need to have the ECM re flashed.

The transmission from a 3rd gen OHV engine bolts right to the V6. All of this info is on page 1 of this sticky. Don't make this more complicated than it is. Do the auto to manual swap no different than if you were keeping your same engine. Get the appropriate mounts from the donor car your transmission comes from. As for the engine, none of the Grand Am 3.4 cars were manual. The engine is no different between a manual and an automatic. You just put the flywheel on in place of the flex plate and bolt it up. As for the ECM, you do need to have your automatic transmission codes deleted from it. You can do this with HP Tuners. It's not complicated.

Re: V6 swap info for 3rd Gens
Tuesday, August 17, 2010 11:45 AM
Casey Payne
I have a manual trans from a Cavalier 2.2 that bolts up to my 3.4, I'm wondering if anyone knows if the clutch pattern from the Cavalier will match up to the flywheel bolt pattern to the engine out of the Grand Am.

I have a manual trans from a Cavalier 2.2 that bolts up to my 3.4, I'm wondering if anyone knows if the clutch pattern from the Cavalier will match up to the flywheel bolt pattern to the engine out of the Grand Am.

Really, you need to ask these in the regular forum, instead of the sticky. For starters, the Grand Am 3400 will not have a flywheel, because they did not come with a manual transmission. You just use the 2.2 flywheel.

Re: V6 swap info for 3rd Gens
Tuesday, October 26, 2010 5:30 PM
jfire26
There's a pretty distinct difference between the most recent sunfire's (which are the 3rd gen?) and the others. But where do the lines for a 2nd and 1st gen j body start and end?