The only way I was able to get those lower bolts in was to slide them in with a set of mechanical fingers, then tighten them with a pair of vice grips clamped to the long allen wrench. As far as the belt goes I had no luck finding a longer one, and also had no luck in the search for a smaller tensioner pulley. My guess is that you might be able to squeeze it on there with the 3.3.

As you know I'm interested to see how it all works out for ya.

When did you install a TVS on a car?

Re: Harrop HTV1320 LSJ
Monday, June 18, 2012 3:21 PM
Tinkles(KGM)
Oh yea, The Wizard beat me to the punch a month or so ago(and helped motivate me to get mine on). There are 2 black TVS powered cavaliers now. One runs and the other doesnt.

Error: Sig not found.
Re: Harrop HTV1320 LSJ
Monday, June 18, 2012 3:31 PM
the wizard
It's been done before either of us were thinking about it. I recall at least one Cavalier from another country that was making almost 400whp. He's got a couple of videos up somewhere. Fun stuff.

Re: Harrop HTV1320 LSJ
Tuesday, June 19, 2012 4:36 PM
oldskool
So I guess there's no hope of getting a phenolic head-to-manifold spacer in there too? From the little bit I saw on Matt's car before the heat exchanger finished puking, it looked promising.

I'm excited. Even with the 3.3" pulley, the TVS is barely breaking a sweat, and should run pretty damned cool. That, and having fueling that actually makes sense with the racetonix pump, it should be a blast to tune!

Kyle, you're not running either spacer correct?


Kyle, you're not running either spacer correct?

No spacers. In the future i would like a manifold to head phenolic and a plate under the blower for nitrous and/or meth. What belts did you look at? Im willing to bet that there might be a belt that will work but might have more than 5 or 6 ribs. There is also the options of ZZP's adjustable tensioner and over-sized tensioner pulley if a belt is abit too long for the "stock" pulleys. 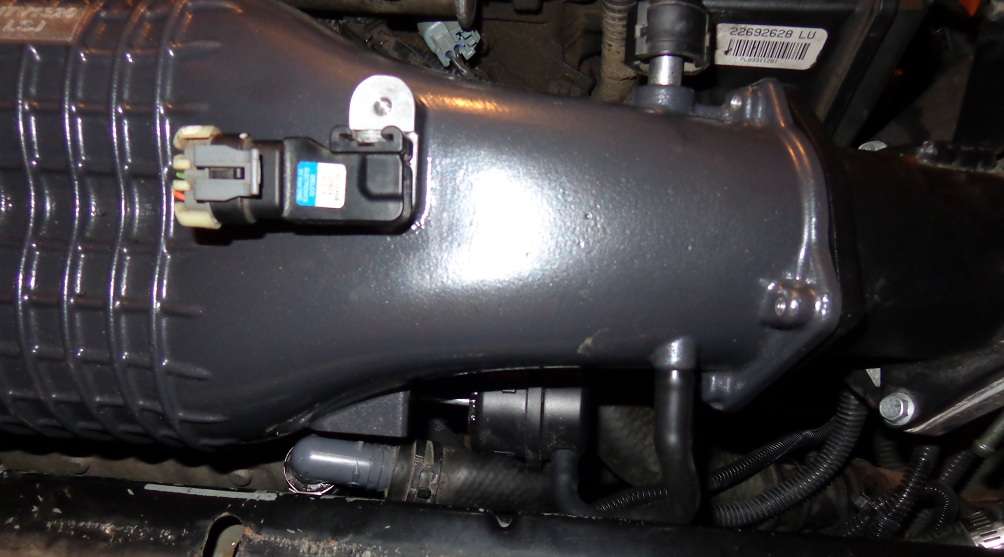 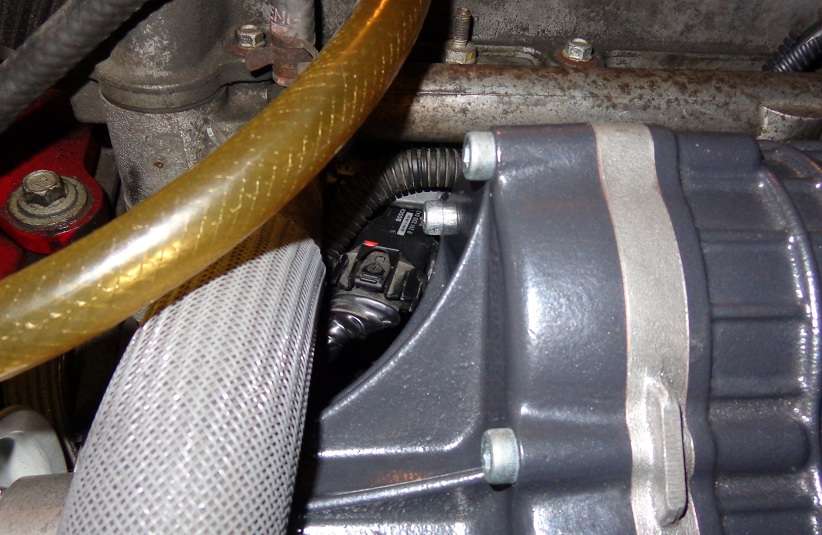 Now just some pics. Yea i know the car is filthy, i plan on giving it a top to bottom scrub once i move off this damn dirt road. 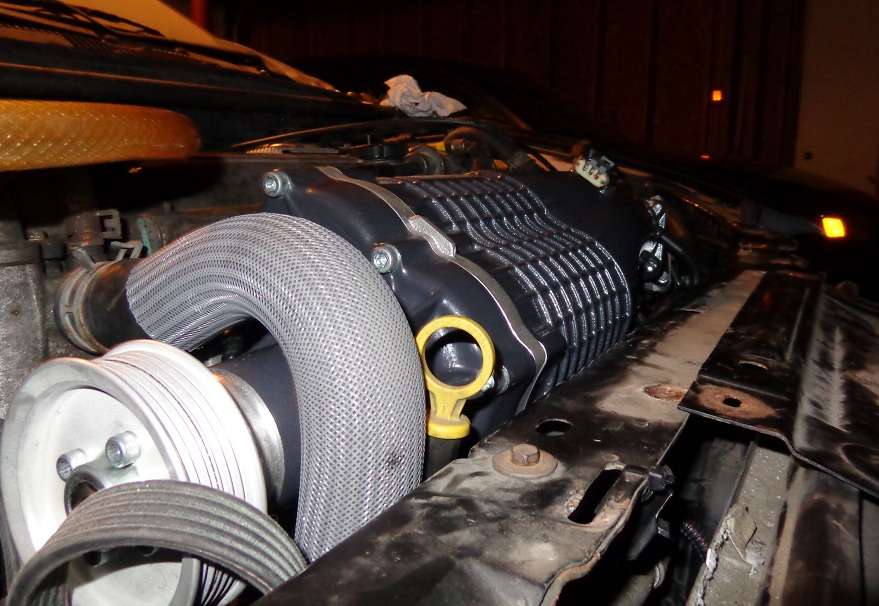 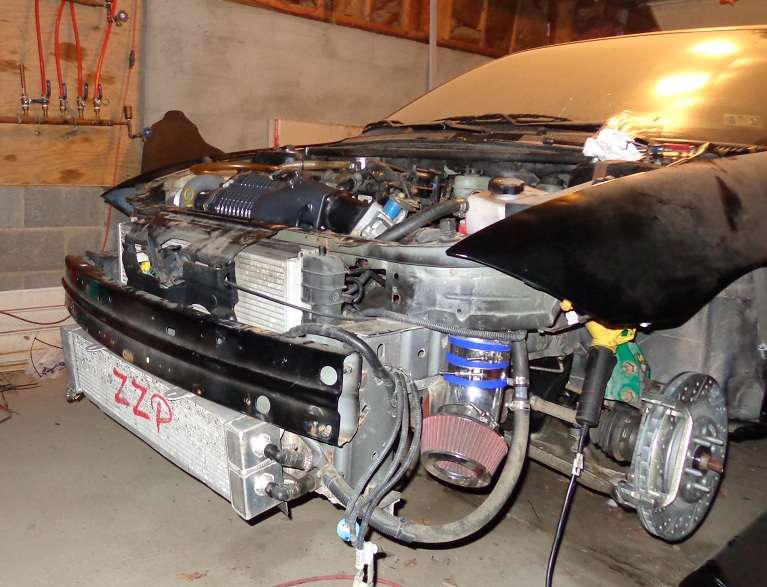 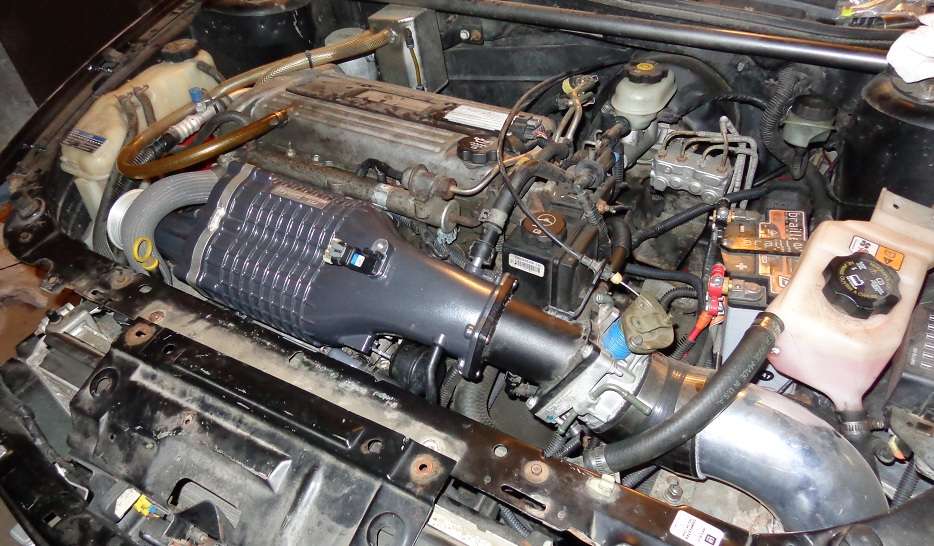 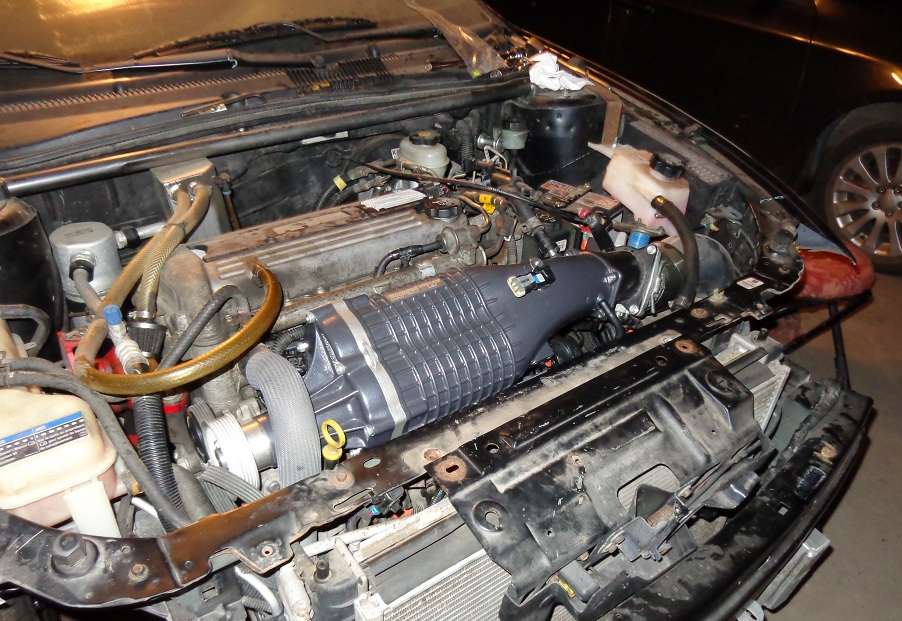 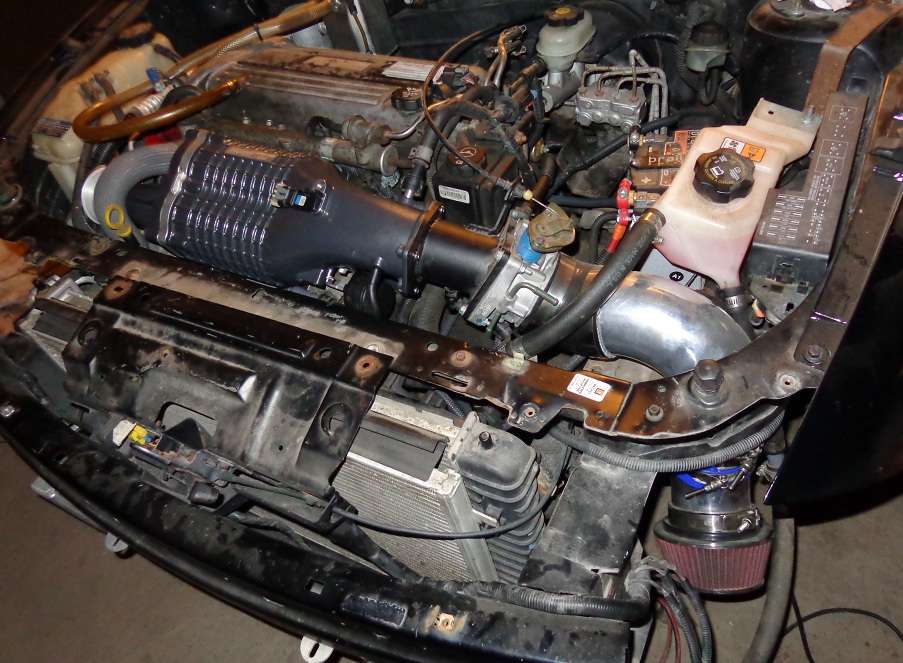 Error: Sig not found.
Re: Harrop HTV1320 LSJ
Wednesday, June 20, 2012 1:17 AM
EVILution (KGMs FrankenCav)
Looking good Kyle...I should probably just keep your hood for my car, don't wanna scratch it up on that behemoth blower!

Can't wait to see the new setup in person...and more excited to ride along for the tuning!


RIP JESSE GERARD.....Youll always be in my thoughts and prayers...

Re: Harrop HTV1320 LSJ
Wednesday, June 20, 2012 9:59 AM
the wizard
I briefly looked through the Gates catolog at Oreilly, and it didn't list any belts that were ribbed on both sides that I saw. I ended up using the stock GMPP belt with the adjustable tensioner in the stock position, 3.15" pulley, had to yank the blower spacer, but retained the IM spacer.

Be careful of that bypass valve vacuum line rubbing on the core support; those valves are brittle and I could see the engine rotation snapping the nipple off.


Be careful of that bypass valve vacuum line rubbing on the core support; those valves are brittle and I could see the engine rotation snapping the nipple off.

I have RKSport engine mounts and TTR tranny mounts. The nipple isnt touching, the hose is just alittle long. Im not skeeerd.

Any luck with the belt fitment situation?

Re: Harrop HTV1320 LSJ
Wednesday, June 20, 2012 10:08 PM
Shawn McKenzie
Are you using the sensor to plug the hole on the supercharger, thats a temp sensor for the cobalts right?
I know how other things can slow progress, currently I'm getting side tracked with the GP for Neon/Saturn rear disc brake setup.

On another note, you have any more of those LS1 TB adapters?


Any luck with the belt fitment situation?

Yea, but i'll get to that later.

I was poking around the car last night and saw this. Theatrically they shouldnt touch(pulley and tensioner), but they are still too close for comfort. 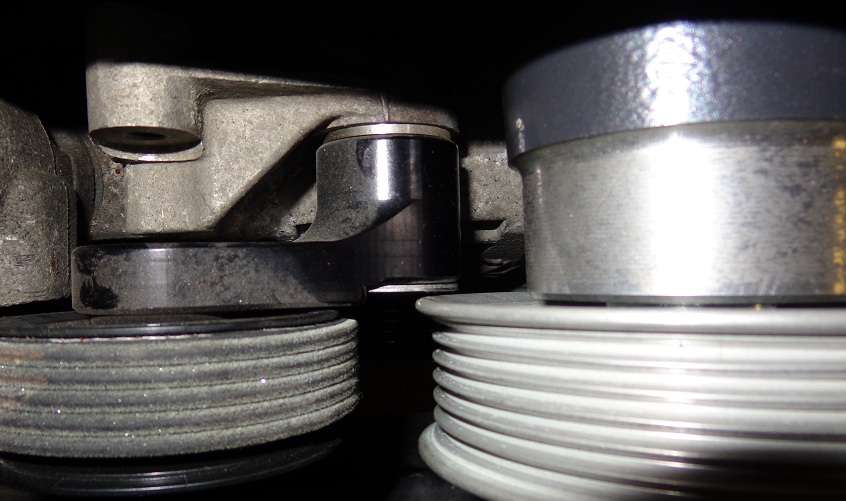 So "solving" that issue also solved the belt issue. I just tossed the 3.3" pulley on instead and am going to forgo the 3.5" pulley.

Are you using the sensor to plug the hole on the supercharger, thats a temp sensor for the cobalts right?

Honestly it is just a sensor i found in the garage that "fit". I believe it is the MAP sensor off the stock L61 intake manifold. I have a better solution in the works.


On another note, you have any more of those LS1 TB adapters?

No. Jeffie and i have started redesigning them, but they have been put on hold until the cav is back up and running. Good news is that i now have a M62 on the bench that i can do mock up on.

Good news is that i now have a M62 on the bench that i can do mock up on.

and an m62 powered car in williamsport you can test fit on too.

f you can do anything to make the tb cable route on the bottom like the stock l61 tb that would rock......either way im buying one though.

Not possible, the throttle wheel is on the wrong side of the TB for that to work.


I did get the lower 2 S/C bolts in and started by using a pair of needle nose pliers, a 6mm allen wrench, and a pick. But i was not able to tighten them down. The radiator support is in the way. A removable radiator support is probably in the cars future, but until then i ordered these 2 items from Snap-On.

They look like they should get the job done. If not, then im not sure what to do. I really dont want to have to rip the radiator and condenser out of the car yet.

Re: Harrop HTV1320 LSJ
Thursday, June 28, 2012 9:11 PM
Tinkles(KGM)
The tools arrived today and i believe that the allen head swivel socket would have worked if i could find my 1/4" universal swivel. I ended up shoving my hand between the radiator and the radiator support and was able to tighten the bolts down with a standard length 6mm allen and a stubby 6mm allen. After than the belt just popped on and it is finally 100% installed. It is ready for tuning once the rest of the car is finished. 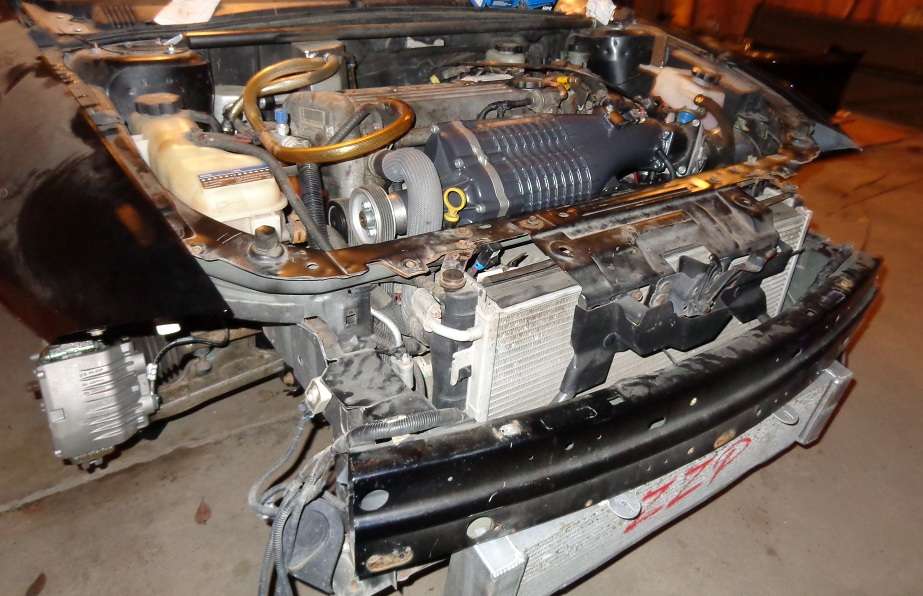